Hansal Mehta the director of this astounding movie has gone beyond the fancy realms of Bollywood to make an unnerving script into a captivating movie experience. Being a law student, I would say this is a must watch movie for all aspiring lawyers.

“By showing me injustice, he taught me to love justice. By teaching me what pain and humiliation were all about, he awakened my heart to mercy. Through these hardships I learned hard lessons. Fight against prejudice, battle the oppressors, support the underdog. Question authority, shake up the system, never be discouraged by hard times and hard people. Embrace those who are placed last, to whom even bottom looks like up. It took me some time to find my mission in life – that of a criminal defense lawyer. But that ‘school’, and that Teacher, put me on my true path. I will never be discouraged. Even thorns and thistles can teach you something, and lead to success.”. - Roy Black.

These are the words that drove criminal defense lawyer and human right activist Sir Shahid Azmi throughout his life. His biopic is taken so beautifully,doing justice to the life he lead. It shows us how innocent Shahid was arrested for Terrorist activities, taken in custody, tortured mercilessly and was acquitted after two years. How he decided to become a lawyer, How he ran pole to pole to deliver justice for the innocent even if it was at the cost of his own life. In a career span of seven years Shahid Azmi had 17 acquittals. An unusually high acquittal rate for a system that is known for its inability to render timely justice.

It is true when police arrests someone in relation to POTA we all direly start hating that human and wish for the last end torture as punishment for him/her but have we ever thought of, what if he/she was innocent?It is a usual plot of the Police officers in India, due to the pressure from the higher officials they tend to close the file as soon as possible. Hence in most of the cases it is the innocents that get trapped by the law enforcement wings of the country and the real culprit enjoys alcohol while plotting for the next attack in an AC Hotel room. 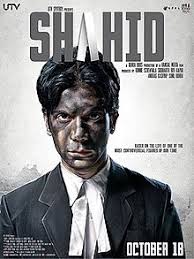 Shahid is a crucial document of our troubled times. It builds an incredible grippy case study of persecution and vindication.
This movie touched me deeply and I started thinking of justice from a lawyers perspective. I don't think I will let my human emotions overpower my intellect hereafter. Adv. Shahid, served the innocent till he breathed his last in 2010 at Mumbai where he was assassinated. It just proves us that the system of '1 innocent should not be punished even if 100 guilty men are let free' doesn't function the way it is supposed to be. It creates in us an empathy for the accused, the trapped innocents who are tortured severely for their carelessness.

Watch this movie to see how the real drama in Courts happen.
Posted by Medha Vagmi at 08:37 No comments: